Two cows lived in Bristol’s Harbourside in an exhibition that explored current food and farming systems – and their wider environmental impacts, 21–25th April 2016.

Political Ecologist Vanessa Reid lived with two pure-bred Guernsey cows for five days in a temporary Milking Parlour constructed in Anchor Square, Bristol. Free and open to all, the installation included a panel talk from 5.30-6.30pm each day bringing together voices from across the spectrum of the debate – from dairy farmers, to vegans, to food producers, to academics and more. This was a chance for people to give their own views, and listen to others, all whilst considering their own food choices – particularly in relation to catastrophic climate change, which becomes more urgent a threat to our society with every passing day. Industrialized farming is one of the the largest contributors to climate change, producing a quarter of global emissions and consuming 70% of the worlds fresh water. The question is: how do we feed ourselves, and our burgeoning population, without it costing the earth?

This immersive and personal exhibition was the culmination of her intensive 18-month Cape Farewell FarmArt residency – a journey exploring a range of organic farms across South West England.

Designed to inspire lively debate and discussion, The Milking Parlour sought to explore the current state of farming; its impact on the environment and its relationship to climate change, global food inequalities, biodiversity and health. It asked us to question what we consume – and how it impacts on all of our futures. It created a dialogue between the farming industry and general public so that we are able to work together to create a more socially, politically and environmentally fairer, sustainable food system. As the artist explains:

“Our planet is in the midst of its sixth mass extinction of plants and animals, with industrial agriculture being one of the largest contributors. If we are to halt our climate crisis, we need first to understand the many complex systems which contribute towards it. What agricultural systems exacerbate climate disruption, and which ones build resilience and support health? The Milking Parlour came into being as a direct response of wanting to understand, first hand (literally!), where my food came from. I hope it can be a platform to gain a deeper understanding of some of these complex themes around food, and food choices.”

Throughout the duration of the show Vanessa lived with the cows: she milked them, fed them, mucked them out and slept with them, demonstrating the arduous and challenging processes involved in the production of a very ‘normal’, everyday product. The two cows (who have travelled to numerous farm shows) and the space, were fully certified and risk assessed. The cows were very well looked after, with vets and farmers on site, and 24-hour security. Watch the short film which documents the journey Vanessa took when producing this exhibition.

Every day from 5.30–6.30pm there was an informal discussion space for all to join – less of a panel and more of a conversation. Vanessa put out clean blackboards every morning with chalk for people to write whatever questions they might have to the cows, to the artist, farmers, vegans, environmentalists… to whoever! During the sessions, questions on the board were addressed. Every viewpoint was welcome.

Explore some of the questions, comments and responses written on the boards below.

“How can we make a difference? Where is the best place to buy milk to ensure the farmers get a good/fair deal?”

“Has ‘cafe’ culture noticeably increased the amount of milk we drink?”

“Do farms in the UK produce enough milk to feed the population? What is the best way to ensure farmers get a fair price for milk?”

“Everything in moderation – one good piece of meat oince in a while, rather than a cheap one every day.”

“What makes you stay in farming when it’s so hard?”

“Would you prefer if people paid more but drank less milk?”

“I support a fair price for milk. I drink organic milk because I think cows are better treated that way. I have my milk delivered in glass bottles. I pay nearly £1 a pint – and am happy to do so. thank you for raising these issues.”

“What happens if the cows are not milked?”

“Are you for or against Brexit? Is there much competition from the EU?”

“Imagine having your new born baby cruelly taken from you – only ro be forceably impregnated again and to suffer the same cruel fate again and again.”

“Thanks for helping us think about where our food and drink comes from.”

In the UK alone, approximately 18–20 million tonnes of food is wasted annually costing an estimated £22 billion a year and yet many farmers in the UK can barely scratch a living. More and more the next generation are turning away from farming as the prospects are so bleak. In December 2014 sixty small dairy farmers were shut down simply because farmers could not make ends meet. Having attended the Oxford Real Farming conference and hearing the stories of dairy farmers in the UK who have been crippled by the on-going economic pressures placed upon them, Vanessa decided this residency would focus specifically on milk. How is it that in the UK, milk is cheaper to buy than bottled water? How can something once hailed as a superfood, providing 34 % of our RDA of protein be cheaper than a bottle of water? 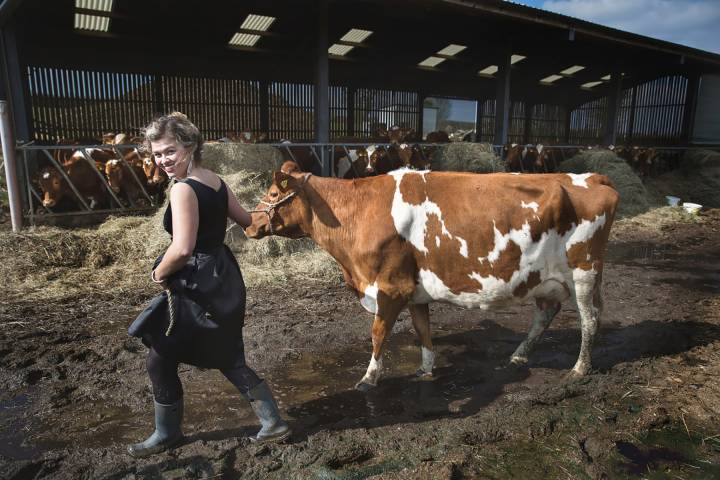 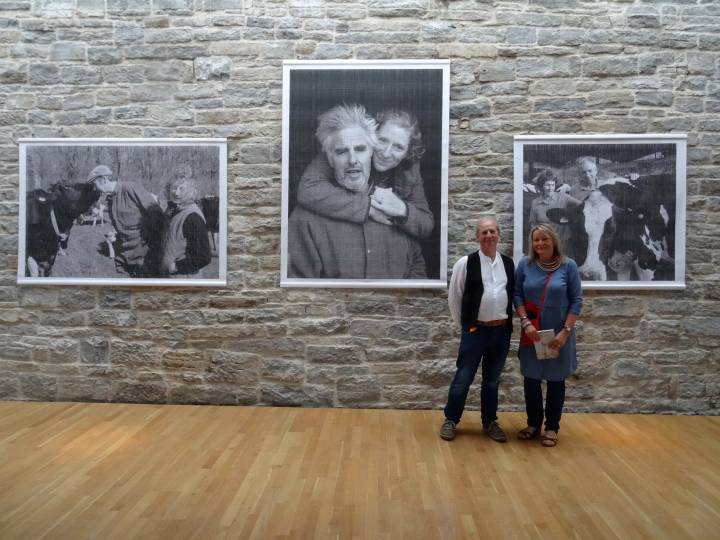